A Game-Changer for Budokan 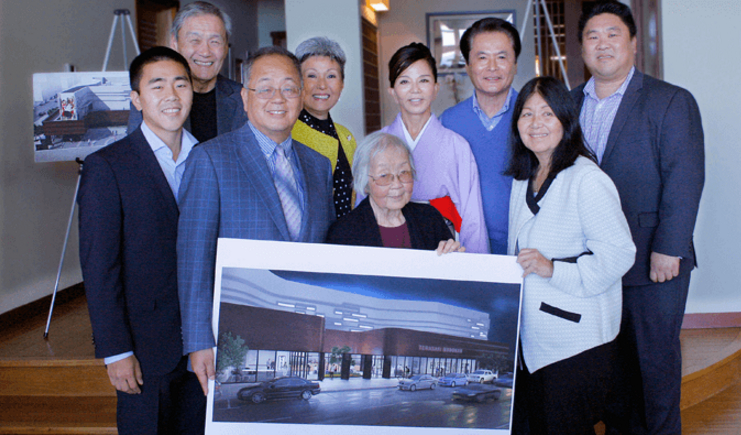 A game-changer. That is the impact of a $3.5 million donation by the Terasaki Family Foundation for construction of the Budokan of Los Angeles.

The multi-purpose gymnasium will be named the Paul I. Terasaki Budokan in honor of the late Dr. Paul Terasaki, a longtime supporter of the Japanese American community and a pioneer in organ tissue typing.

In basketball terms, the Terasaki Family Foundation donation is Steph Curry squaring up for a three-pointer late in the fourth. For Little Tokyo, it means the long-sought dream of a gymnasium in the community is that much closer to fruition.

“We’re completely overjoyed and appreciative of their generous gift: $3.5 million is a major boost to our capital campaign,” said Dean Matsubayashi, Little Tokyo Service Center executive director, said in an interview with The Rafu Shimpo.

“We are happy to see Budokan named after my father,” said Dr. Keith Terasaki. “He was proud to be a Japanese American and he wanted the Japanese American community to prosper. As Japanese American families are spread all over the Southland, the Terasaki Budokan will provide Little Tokyo with a place where all generations can visit and feel like we belong.”

Terasaki, son of Paul and Hisako Terasaki, will be joining the LTSC Board of Directors. He is an interventional radiologist at the Kaiser Hospital on Sunset Boulevard in Hollywood.

LTSC has raised over $23 million and is 90 percent complete with the capital construction campaign. A ceremonial groundbreaking ceremony at the site on Los Angeles Street is planned for August. Once the construction capital campaign is complete, LTSC will seek an additional $3 million for an operating endowment fund.

“Dr. Terasaki was so committed to sustaining our culture and committed to the future, not just today but looking towards the future. We see that in his support of UCLA and organizations like JANM and JACCC,” said Debra Nakatomi, LTSC board chair. “He really had a vision to ensure that these organizations will be here for future generations. And I think that Budokan is part of that vision because it connects the generations and will be here for many years.”

Budokan, in its early stages, received substantial support from the Aratani Foundation, which was instrumental in jump-starting fundraising. The gymnasium will be named after them. The George, Ruri, Lisa and Nathan Sugimoto Family Foundation also made a generous donation and the lobby will be named on their behalf. Both family foundations have been generous supporters of many Japanese American community organizations.

Mike Murase, LTSC director of programs, said the campaign has been multi-faceted, from corporate sponsorships to grassroots outreach to many groups, including the basketball teams and leagues throughout Southern California.

“In the basketball world today, people my age always talk about how it used to be and how it’s different now,” Murase said. “I think recognizing all the changes, we still want to be able to say the Budokan is a place where we aspire to pass on some of those important values of community and family.”

A rendering of the Paul I. Terasaki Budokan.

LTSC first began working on the concept of a Little Tokyo gymnasium in 1994. Matsubayashi, who joined LTSC in 1996, said the mission for the Budokan has evolved as Downtown and the Japanese American community have changed.

“At that time the big motivation for the gymnasium was more of an economic development tool because there wasn’t a lot of activity going on in Little Tokyo. The question was how can we bring young people and families back to Little Tokyo?” he noted.

When the Budokan is finally built, it will have been a long time coming. The kids who first put their handprints on murals in support of the gym in those early years are adults now.

Nakatomi pointed to a framed photo of a drawing of the gymnasium given to her by then-LTSC Executive Director Bill Watanabe, who led the early efforts to build the Budokan.

“There was a Maya Angelou quote that read ‘It may take years to realize a dream, but dreaming itself is an elevating experience.’”

“Bill always believed it’s going to take time. We can’t be too impatient about this because this is something important for the community,” Nakatomi said. “It’s happened because of the community. There are so many people to thank and appreciate when the time comes, it’s been a broad community effort.”