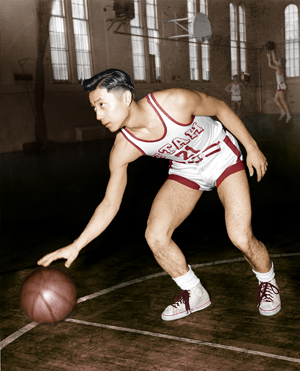 Wat Misaka was a first- round draft pick for the New York Knicks.

Misaka, now a 94-year-old resident of Utah, became the first person of color ever to play in the NBA with the New York Knicks back in 1947, the same year Jackie Robinson broke into the major leagues with the Brooklyn Dodgers. He later declined an offer to play with the Harlem Globetrotters.

Misaka played college basketball for the University of Utah and helped his school win the 1944 NCAA and 1947 NIT championships. He served with the Military Intelligence Service during the U.S. occupation of Japan and spent several months in Hiroshima, which was recovering from the atomic bomb.

He is featured in the award-winning documentary “Transcending: The Wat Misaka Story” and was inducted into the Japanese American Sports Hall of Fame in San Francisco along with Ann Kiyomura Hayashi (tennis), Tommy Kono (weightlifting), Wally Yonamine (football and baseball), and Kristi Yamaguchi (figure skating). Although his travels have been limited in recent years, Misaka has agreed to meet people from the Japanese American basketball community and attend the “Straight Outta Little Tokyo 3” fundraiser for Budokan that evening.