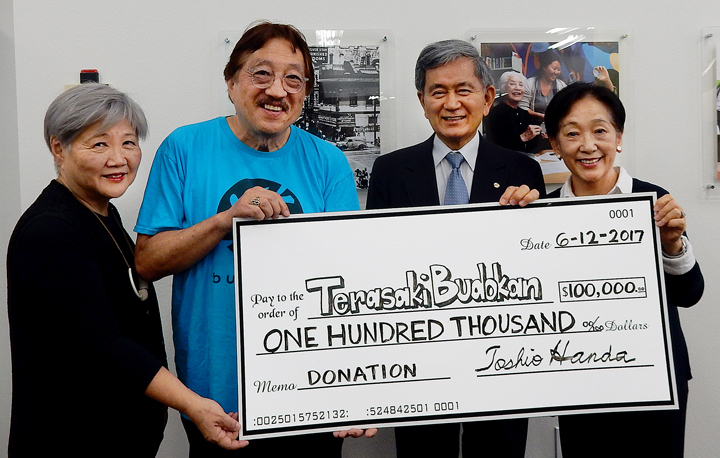 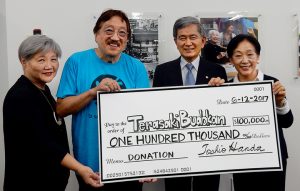 Terasaki Budokan, a new gymnasium and community center in Little Tokyo, is being built by the nonprofit community group Little Tokyo Service Center.

Toshio “Terry” Handa, a major donor to Budokan, came from Japan in 1983. Over the years, he worked hard and was successful in business. He also became a respected community leader, especially among the Japanese-speaking sector, and was able to build a bridge between the newer immigrants and the more established Japanese Americans in the community.

“I feel fortunate to be able to contribute to Budokan. I believe it will be a wonderful facility for future generations of the JA community and a valuable asset in Little Tokyo,” said Handa when he donated $100,000 to Budokan’s fundraising campaign in 2017. “I wanted to make sure that those of us who are called Shin-Issei are a part of building Budokan,” he added.

More recently, Akira Fujimoto, an immigrant from Okayama-ken, made a similar donation of $100,555 to Terasaki Budokan. “As a shopkeeper and business owner, I have deep roots in Little Tokyo and care about this community. I hope that Nikkei and Shin-Issei who are dispersed in various neighborhoods will gather in Little Tokyo to enjoy sports and other events,” said Fujimoto. “It would make me very happy if others in the Japanese-speaking community will join me in donating to this community-wide effort.”

“We are grateful for these generous donations from two prominent figures in the Japanese-speaking sector of our community,” said LTSC Executive Director Dean Matsubayashi. “Their contributions are helping us strengthen Little Tokyo, and we’re honored they’ve chosen to be part of the Budokan legacy. As we make the final fundraising push, these donations could not have come at a better time.”

“Handa-san and Fujimoto-san are very generous to share their good fortune with the community. But there are a number of other Japanese-speaking people who have stepped up,” said Mike Murase, Budokan’s fundraising campaign director. “For example, there was an elderly woman who lived at Little Tokyo Towers, a housing complex for seniors on fixed income, who gave us $1,000, saying in Japanese, ‘Before I return to Japan for good, I want to give back what I can to the community in which I spent the last 50 years.’”

For decades, the Little Tokyo community toiled away at bringing Budokan gymnasium and community center to the historic neighborhood. The fruits of those efforts are finally visible with Terasaki Budokan, the big gym in Little Tokyo, currently under construction. Set to open in 2020, Budokan will feature a two-court gymnasium for basketball, volleyball and martial arts, as well as an outdoor plaza for community events and activities for seniors. 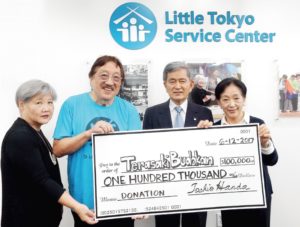 Born in Tokyo, Handa moved to Pasadena as the aircraft department manager for the Japanese trading company Itochu Corporation. Later, he and his family launched their own private trading company in LA.

During his term as president of the Japanese Chamber of Commerce of Southern California, the 2011 Great East Japan Earthquake struck off the coast of Japan, causing immense damage. In response, Handa helped the Japanese American community raise $560,000 in donations, all going to disaster relief through UNICEF. Handa continues to visit the disaster area on an annual basis.

As recognition for his significant contributions to the community, Handa received the Commendation of the Consul General of Japan in Los Angeles in 2014.

Akira Fujimoto is a native of Okayama-ken. He first arrived in L.A. in 1972 on an immigrant ship when he was 22 years old.

Fujimoto opened a gift shop for Japanese tourists in 1975. Over the years, that company expanded into real estate investment, trade and retail business. Fujimoto claims he is indebted to the Little Tokyo community for his success.

In addition, Fujimoto has been active in a nonprofit prefectural association, Okayama Kenjinkai, and the Kansai Club, which is composed of people from Osaka, Kyoto, Nara and Hyogo.

For their generous contributions, Handa and Fujimoto will both be recognized on the major donor wall in the lobby of the new Budokan facility.