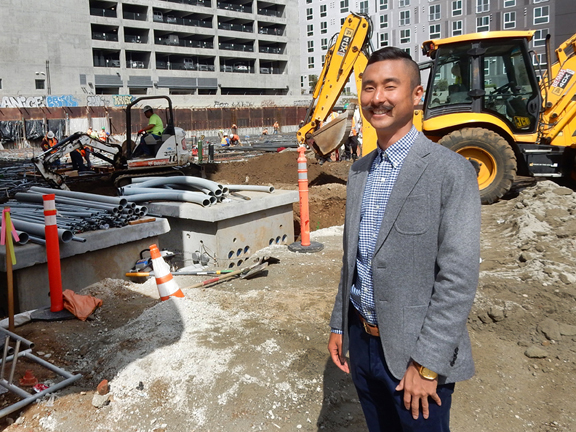 Gymnasium scheduled to open in Little Tokyo in spring 2020.

Ryan Lee, 30, of Los Angeles has been named to become the permanent head of Terasaki Budokan, a sports and activities complex currently under construction in Little Tokyo, according to Dean Matsubayashi, executive director of Little Tokyo Service Center (LTSC). “It has been a long haul to get to this point — over 25 years — since we started working on the task of building a gym in Little Tokyo,” said Matsubayashi. “We are pleased to have Ryan Lee become the first staff person of the new project. As director, Ryan will not only assist in the final stages of the capital campaign, but will begin the process of planning for the transition into operating a major facility that will be a magnet for Japanese American youth and others in our community.”

Terasaki Budokan, located on Los Angeles Street between Second and Third streets, is slated to open by spring of 2020. The complex will include a gym with two basketball courts that can be transformed into volleyball courts, martial arts dojo, banquet room and other uses. It will also feature an outdoor plaza for community gatherings and concerts as well as a terrace, toddlers’ playground, community garden and walking path.

“It is so thrilling to think about the long-awaited opening of a gym in Little Tokyo is less than a year away,” exclaimed Alan Kosaka, the chair of the capital campaign. “But as construction continues, we are still $2.2 million short of our project goal of $33.8 million. We hope that we can continue to count on generous donors to help us close the gap.”

Lee will be working closely with LTSC’s staff and leadership, and will work toward rounding out the Budokan team with additional staff. “It is such an honor to be able to work on this historic and history-making project,” he said. “I look forward to working with and learning from the LTSC team to make the Terasaki Budokan the ‘Home Court for All.’ I hope that my passion for athletics and dedication to youth will help the Terasaki Budokan be a meaningful experiences for its users.”

Lee, whose father is Taiwanese and mother is Japanese American, hails from South Pasadena and “grew up being in gyms pretty much all my life.” Prior to joining the Budokan team, Lee was a program facilitator for a nonprofit, Pathways in Education, where he worked with at-risk youth and inner-city high school students in college readiness and internship programs.

He also co-founded his own nonprofit called Not Your Average Basketball Camp, to lead sports programs for special-needs youth, including children in Japanese Speaking Parents Association of Children with Challenges (JSPACC). Construction of the Terasaki Budokan, located on Los Angeles Street between Second and Third streets, is proceeding.

Lee, a graduate of UC San Diego, coached varsity basketball at his alma mater, South Pasadena High School. He also coached the Yonsei 24 boys team that traveled to Matsue, Japan, and this coming summer, he will travel to Shibata, Japan as one of the coaches of the Yonsei 26 boys team.

As a player, he honed his skills as a member of the Pasadena Bruins and Yonsei 10 team. His connection to the Japanese American experience in Southern California extends well beyond the gym; he has been the president of the Southern District Junior YBA and participated in the Rising Stars Youth Leadership Program.

“These programs helped me establish a strong sense of Japanese American identity, and my work experience has given me a deep appreciation for the difficulties that economically disadvantaged youth face,” Lee said. “In taking this position, I know that I have so much to learn about every aspect of running a successful facility, but I am more than excited to accept the challenge. I look forward to contributing to the effort to build and sustain a vibrant and active Little Tokyo for years to come.”