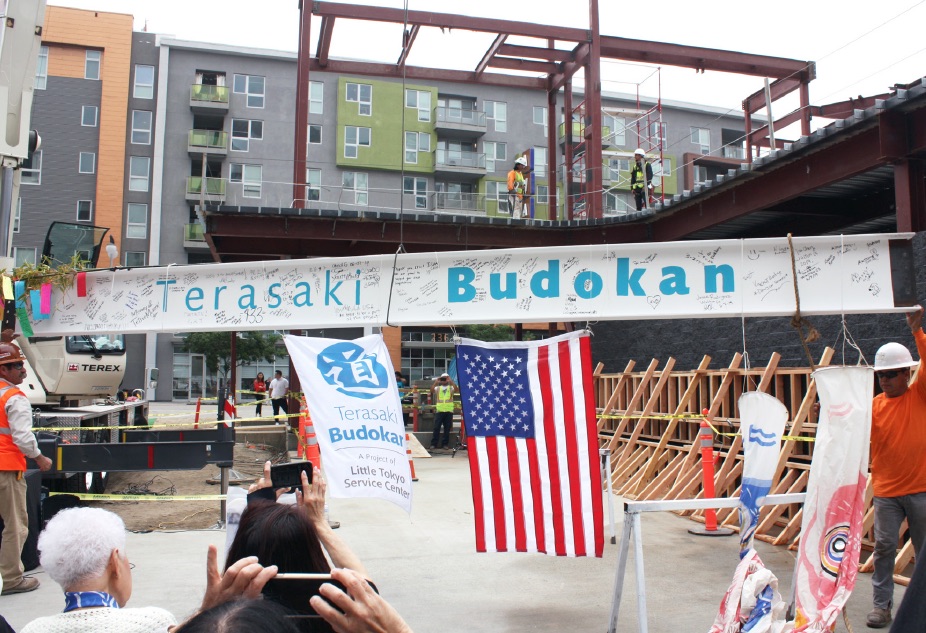 Two koinobori flags seemed to swim upward, as a 21-foot, 840-pound white steel beam was lifted high into the air on Friday on the site of the future Terasaki Budokan in Little Tokyo. A crowd of approximately 150 gathered below as crane operator Ricardo Alamillo guided the beam into place atop the gymnasium on Los Angeles Street, and they cheered as “We Are the Champions” by Queen played.

The “topping-off” ceremony was a chance to celebrate the fact that the construction phase on the gymnasium is past the halfway point; the facility is scheduled to open in early spring 2020. Ryan Lee, the project manager for the gymnasium, explained its significance.

“It signifies the last steel beam being raised to the highest point in construction on the structure. This is more than just a gym, this is more than just a facility. The Terasaki Budokan is really a testament to what we can accomplish when we all work together as a community,” said Lee. “When its doors open in spring of 2020, it will show the vibrance and energy that is Little Tokyo.”

Prior to the ceremony, people wrote their names and messages with black markers on the steel beam and adorned the beam with wishes written on colorful tanzaku papers.

Among them was Bill Watanabe, former Little Tokyo Service Center executive director, who guided the project for years. He inscribed, “This tops everything.” George Sugimoto, Consul General Akira Chiba, Keith Terasaki, Jan Perry and Aiko Kawaratani were among the attendees at the ceremony.

“I drive by here every time I come to Little Tokyo, so today is very monumental for me. The only thing that will probably exceed it will be the grand opening,” Watanabe said.

Keith Terasaki and other members of the Terasaki family were also in attendance. The gymnasium is named in honor of the late Dr. Paul Terasaki. Bill Watanabe, former Little Tokyo Service Center executive director, wrote on the beam before it was placed on top of the building.

“It’s been a long time coming and I’m looking forward to completion,” Terasaki said. “Hopefully it will help build community and bring more people into the area. It’s more than just a gymnasium.”

Consul General Akira Chiba explained that the topping off ceremony is called mune age in Japanese and he led the gathering in a ceremonial single clap at the event’s conclusion.

“I’d like to pay tribute to all those who guided this project along, shaped the vision and worked tirelessly to gain the community and financial support to make the dream a reality,” Chiba said.

Former City Councilmember Jan Perry was recognized for her pivotal role securing the ground lease on the property. She proclaimed that the Terasaki Budokan will be a “legacy project” for Little Tokyo.

“This is a tribute to the resilience of the people who started it, the fact that most of them are still here and that will translate into something that spans the generations,” Perry said. Construction will be completed by end of this year. Speaking to The Rafu, Lee said that they are currently staffing and planning for the future operations of the facility. Terasaki Budokan is also seeking to raise an additional $1.8 million towards the $33 million goal.

The facility will feature a two-court gymnasium, an outdoor plaza with a stage, a community room, a toddlers’ playground and a community garden.

“I really think this will provide opportunities and memories for the next generations of youth. Not only Japanese American youth but youth here in Little Tokyo and the surrounding Downtown neighborhood,” Lee said.